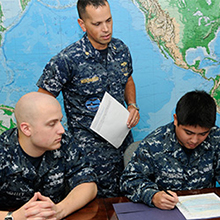 Dennis Wischmeier doesn't sound like someone who had to give up his dream job flying EP-3 reconnaissance missions over other countries. After a cancer diagnosis, however, Dennis had to make an unexpected career change, and the Navy allowed him to shift from a flight career to the field of intelligence.

"After completing chemo and multiple big surgeries, I was declared cancer free.  But Navy Aviation Medicine was hesitant with me flying again so they let me lateral transfer to a new community."

The new position was a good fit because Dennis already had experience gathering intelligence as a pilot. During one mission, he collected a piece of intelligence that was elevated all the way to the president. In that moment, he saw how his daily job directly influenced international politics.

"While we were doing our mission ... we picked up [information] and relayed it back to our command. It went all the way up the chain to the president very quickly ... we picked up this intelligence and it was shot back all the way. That was rewarding."

Now based in Hawaii, Dennis is the second-highest intelligence officer in the Pacific Submarine Force. He provides critical intelligence to the force commander. Not only does Dennis deliver information up the chain of command, but he also briefs submarine crews who are about to deploy.

"Their job is to keep track of our adversaries. They are the guys who go out there on missions, hoping they never get found. It's great to know what's really going on. That's what drives me at work."

Since Dennis hasn't served on a submarine and has an aviation background, he works hard to build a strong relationship with the members of the submarine crews. His background gives him a different perspective on intelligence, yet he can still see situations from a submariner's point of view.

"I know what it means to go on the front lines. I understand the need to support the people who go downrange. I have to do everything I can do, 24 hours a day."

Although he is busy with his intelligence career, Dennis still hopes to continue his education. He has already earned an M.B.A., and he plans to earn a second master's degree or Ph.D. in an intelligence-related field.

"There are several Ph.D. programs all centered around politics and intelligence. There's also a graduate program where you work for a congressman on Capitol Hill for a year while you get your master's, and then you work at the Pentagon."

Dennis has had some unexpected twists and turns in his personal and professional life. Through it all, he is grateful for the many opportunities the Military has given him.

"I was really excited that, after being cured from cancer, the Military even let me stay because there was a period there where I might have been forced to get out. Instead, I just lateral transferred to intelligence, and here I am. I have a lot to be thankful for."

"It’s great to know what’s really going on. That’s what drives me at work."