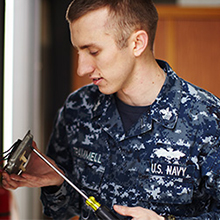 “I didn’t really have a direction in life. I was just sitting around, spinning my wheels and getting into trouble.”

Ryan Trammell grew up in Normal, Illinois. He played high school football for a bit, but found himself making poor decisions outside of school and getting involved with the wrong crowd. His father served in the Navy for four years, and his mother’s side of the family boasted at least five service members, so Ryan knew a little bit about the Military. Since he felt his life was at a standstill, he made a decision to follow in his dad’s footsteps — and he joined the Navy.

"Helping people who can’t help themselves, I think, is a big part of it. Service to me is defending the greatest country in the world."

“My dad and I talked to [the military career counselor] about the jobs I qualified for. He gave me three jobs, one of them being a construction electrician. I jumped at that. My dad has a construction business, so I thought, ‘Yes. That’s what I want to do.’”

Ryan had worked with his dad on and off in construction. For him, the Navy was a great way to get training for a job, learn what he needed to learn and get out and work for his father. Ryan was adept at construction knowledge, but knew very little about the electrician side of things — until his Navy training started.

“You become a jack-of-all-trades. When I go out on a project, I do anything from building forms and walls to pouring concrete. Once it comes time for the electrical work, I install lighting systems, repair generators, even power up a site. We’re working on power lines, high voltages, transformers.”

As part of the Construction Battalion (CB, also known as Seabees) team, Ryan works with other skilled service members in a team environment, all pulling together for a common mission. And no mission is like the one before, ranging from jobs on U.S. soil to work sites abroad.

“I’ve been to Panama. We constructed a community center there from scratch. We went out to a field, cleared it and put a building up. Another time, I had just finished a field exercise. I returned home, and they told me not to unpack. I was headed to New Orleans and [Hurricane] Katrina.”

An Expert in the Field

Ryan is now going on eight years in the Military. Recently promoted to petty officer first class, Ryan’s next step would be to E-7, or chief petty officer. At that point, Ryan will be considered an expert in the field. And his career won’t stop there because his motivation goes beyond personal growth.

“You know, in five years, I will be a chief. And I am determined to do that. I am going to make that happen.”

A lot changed for Ryan in a relatively short period of time. From feeling directionless and hanging with a tough crowd, Ryan now has two viable, enriching paths ahead of him. He could stay in the Military and make a career out of it, or he could choose to start his own business as an electrician — two options he never thought would be possible, at one point in his life.