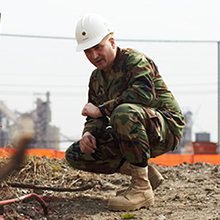 “If you look back in my senior year, the Military was the last place I was going to go. I just wasn’t really thinking about the Military right then … but it started to look better and better.”

"I feel like the guy that carries the torch, the proud American."

Steve Opalenik remembers a time when the Military was the furthest idea from his mind. Growing up and attending high school in Western Pennsylvania, Steve had picked up some skills as a draftsman — the first hint of a career in civil engineering. Upon graduating, he decided to move to Atlanta, Georgia, and try out his skills in an engineering firm.

“I moved cities, but still found myself in a rut. I started talking to recruiters and found that [in the Military] I could find something bigger than what I was doing …”

Steve had a younger brother who went into the Air Force a couple of years earlier and who was very positive about his experiences in the Service. Steve started talking to recruiters and found that the Navy seemed to fit his personality and his individual interests best, so he enlisted.

“I came in as a carpenter. I worked with the recruiter. He was able to get me to the MEPS (Military Entrance Processing Station), and we worked it out to where I had a field I was interested in. I had been a draftsman and had some engineering background, so coming in as a Navy CB (Construction Battalion) — it was what I wanted to do.”

The Experience and Interest to Succeed

Each CB team (commonly known as Seabees) employs up to seven different kinds of workers, including builders, steelworkers, construction electricians and mechanics. Steve’s experience and interest in engineering helped him in his schooling and training — and his passion helped him succeed.

“I went up through the ranks pretty fast, and that is one of the things I am particularly proud of. I started out as an E-1 (a Private) and made my way up … it was merit and hard work.”

After about seven-and-a-half years in the Navy, Steve made chief petty officer and worked in that capacity for a while. After that, he was assigned to work at the Naval Academy. During this time, Steve was able to go to college off duty and earn an associate’s degree as an architecture technician. Soon after, he became a limited-duty officer (commonly known as a Mustang). This means he was selected for commissioning based on expertise and leadership he possessed and was not required to have a bachelor’s degree like a traditional officer. Leadership felt natural to Steve, and he realized he had a knack for it.

“I get to provide some vision as far as where we’re going five, 10 years from now, and [I] participate in different projects to identify everything from warehousing to what kind of waterfront facilities we need. I am kind of the engineering voice to all that.”

Today, as lieutenant commander for the Civil Engineers Corps, Steve’s responsibilities are far-reaching. With as many as seven squadrons being served, Steve is the sole facilities officer for the Maritime Expeditionary Security Group Two, so every day is varied. Whether it is planning new construction or reacting to an impromptu change in a mission, Steve is the one to go to in order to get to the heart of engineering and make it happen. It is his responsibility to look forward, determining which facilities need to be built and how those needs will evolve in the future.

Steve takes his responsibilities seriously and knows he is an integral part of something bigger. He also knows his next promotion will bring even greater responsibility, as he begins preparing other Seabees to carry out missions around the world. It’s something that separates him from many of his peers — in a good way.