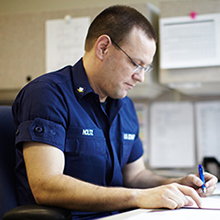 “I went through high school, graduated and got a diploma. I started college, and it was a little rough, taking out a lot of school loans. Money became pretty scarce.”

"It’s amazing the things you find out you can do."

Bryan’s main focus was to get done with school. He knew he wanted to graduate from college, but working full-time and going to school full-time was overwhelming. Bryan heard of the GI Bill, and knew he could get money for school from the Military. He shared this information with his brother, and they decided to enlist in the Marine Corps together. They spent the next four years as Marines, until Bryan decided he was going back to college and civilian life. He got married and put his focus on his family. For a while.

“The Iraq war kicked off, and everything started going on. Everything is going crazy, and you feel like you’re sitting on the sidelines, watching. I felt I had to serve my country. So I went back in.”

He talked with his wife and decided to re-enlist — this time in the Coast Guard. Since Bryan was prior military, the Coast Guard put him into a month-long refresher, making sure he still had the military bearings that he was trained in. After the refresher, Bryan was placed into the position of “non-rate” — which means you are not placed in a specific job. You do whatever is needed, and you get to see everything the Coast Guard has to offer before you make a choice as to what you want to do. Bryan decided on the position of yeoman.

“The Coast Guard is great for a family (and work) life situation … I wanted to be home every night to raise a family. As a yeoman, I could do that.”

Bryan went to the Coast Guard Training Center in Petaluma, Calif., to learn the skills for his current job. A key problem-solver, counselor and source of information to personnel, a yeoman assists service members with issues ranging from career moves, payroll, entitlements and incentive programs to retirement options and veterans' benefits. If service members have a question, the yeoman is whom they seek out.

“I love the organized structure here. I love the people. There are just so many opportunities.”

Although Bryan originally joined the Military to further along his college career, he learned what it means to be part of something bigger and realized that volunteering to protect his country was one of the most admirable moves he ever made. He learned about pride, confidence and trust — in himself, his fellow service members and his country.

“It’s amazing the things you find out you can do. After the Military, you’ve got this … confidence. If it’s physical or mental, you think, ‘You know what? I’m going to go for it. I can do it.’ ”