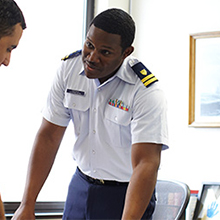 "I did some research. I talked to some recruiters, and I joined the Air Force Reserve. My plan was to be away at boot camp before the grades came home."

When Demetrius Cheeks graduated from high school, he was mature enough to know he still had some growing up to do. He enrolled in a local college, but he wasn't cutting it. His first semester's grades were due to arrive in the mail, and his parents were not going to be pleased.

“A kick in the rear end, basically ... that's what the Military did for me.”

Cheeks decided to join the Air Force Reserve. That was in 1995. Several college degrees later (including his law degree), and now a lieutenant in the Coast Guard, he has indeed matured into the role — and career — he believes, were his true calling all along.

“What attracted me to the Coast Guard's program was, simply, their missions which [are] completely different than any of the other Services. It was more oriented to helping and that sort of humanitarian-type ideal that they have ...”

You can hear the appreciation in Lt. Cheeks' voice as he recalls assisting in the rescue of a small boat full of refugees during his Coast Guard operational days. He remembers all his fellow law school students, who went off to work in the corporate world, and says he has seen things they will never see.

“Whenever we have environmental law cases and we sanction a company or ship or [make them] change their practices to preserve the environment, ... you know you've actually done something to improve something that day.”

One week, Cheeks may be working on an environmental law case. The next, he could be advising his senior officers on administrative law or potential actions in a criminal case. Regardless of the type of case he's handling, he never forgets whom he really works for.

“When I am in court asking for a certain sentence from a judge, it's the government that I am representing. So you don't want to screw it up because it's not just you; it's the United States of America ...”

With a wonderful wife and children and a rewarding legal career, it's not surprising that Lt. Cheeks hasn't felt the need to think about what comes next.

“I like my job, and my family loves it as well ... I'll stay in as long as they'll have me. If they want to keep me around, I'll stick around.”