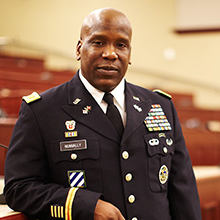 “My parents were going to have to pay for my college as well as my sister’s. Around the same time, my father was taking care of his mother with Alzheimer’s. So I [joined the Military] to ease the financial burden and pay for my own education.”

In a selfless act, Dexter Nunnally, from Atlanta, Georgia., began his career in the Military to help his family. He was a sophomore in college at Morehouse College when he decided to put school on hold and enlist in the Army to take advantage of the GI Bill benefits, which would eventually pay off his student loans and remaining future tuition.

“I was enlisted for about four years before I found out about the Army’s Green to Gold Program … it’s another way for enlisted Soldiers to receive officer commissions other than Officer Candidate School.”

The Green to Gold program allows enlisted service members to temporarily leave Active Duty to study full-time and receive a college degree. In exchange, each Soldier returns as a second lieutenant and serves an additional term (term length varies based on each individual agreement). The program enabled Dexter to return to Morehouse College to complete his degree at no expense to himself. This was a tremendous help to his family.

While enlisted, Dexter served as a signal Soldier. Upon completing his degree and becoming an officer, he chose to stay in the Signal Corps. The Signal Corps is responsible for military communications and allowed Dexter to acquire hands-on leadership training as an armor officer in Korea. Eventually, he became a platoon leader in a signal company to gain more experience in equipment training, cable placement and other communication technology. While learning these skills, Dexter was also practicing leading others.

“In the 11th Signal Brigade, I had about 290 Soldiers that I was responsible for.”

"In the 11th Signal Brigade, I had about 290 Soldiers that I was responsible for."

After successfully demonstrating his leadership ability to his superiors, Dexter was selected as one of 20 officers to attend the Captain’s Career Course (CCC) at Marine Corps Base Quantico in Virginia. A year later, he interned at the Pentagon.

During his time at the Pentagon, Dexter worked with the communications staff while simultaneously obtaining a master’s degree — paid for by the Army — from Georgetown University.

Upon graduating, Dexter was deployed to Afghanistan.

After redeployment from Afghanistan, Dexter was subsequently deployed to Iraq with the 3rd Infantry Division. He served with the 1st Brigade Combat Team, where he was responsible for the entire brigade communications network.

Looking back, Dexter was particularly proud of his service and leadership in the combat zone.

“One thing we can be proud of was that we didn’t lose any Soldiers during the deployment because communications were down. That was a crowning moment of my career so far.”

Today, Dexter is a student at the Army’s Command and General Staff College (CGSC) at Fort Leavenworth, Kansas., as part of a 10-month training program. His next assignment is to United States Northern Command as a joint staff officer.

Dexter’s 20-year anniversary with the Army is right around the corner, and with it, the option to retire with full benefits. However, he is not sure he is ready to stop serving quite yet — if he does decide to return to civilian life, plenty of opportunities will be open to him.

“As a signal officer with my background, I could go into any private industry and work as a systems administrator. Having commanded a company as a platoon leader, they will look at my management skills obtained from those positions.”

With two degrees paid for by the Military and direct leadership and communications experience as a signal officer, Major Nunnally is a strong example of what the Military offers service members: a chance to not only learn and succeed, but to lead future generations toward the same goals.