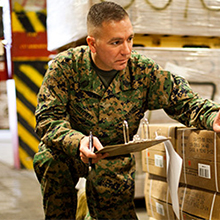 Like many high school students, Ed wasn’t sure what he wanted to do after graduating high school. He was an athletic, sports-minded individual who loved competing and who was drawn to the idea of representing his country — within the sports arena. He enrolled at the University of Louisville immediately after high school but soon found he wasn’t disciplined enough to stay.

“My heart was into the athletics of it, but I wasn’t into pursuing further education at that time.”

Ed received various materials from the Military, and he was drawn to the idea of the Marine Corps. He took a shine to what they stood for — the values, the physical training, the mental challenges. It reminded him of what he loved about sports and competition. Ed’s stepfather had served in the Marine Corps and his grandfather served in the Army, but his family still urged him to finish school. They felt joining the Marine Corps was a hardcore decision. But Ed made up his mind. It was what he wanted to do.

After taking the Armed Services Vocational Aptitude Battery (ASVAB), Ed entertained the idea of becoming a food service specialist in the Military. He spent much of his childhood in his grandmother’s kitchen and worked in food service while at summer camps growing up, so it seemed like a natural fit.

“I knew I wanted to go into a field that would carry over to the civilian world when I left the Military. I knew that.”

"I wanted to go into a field that would carry over to the civilian world."

After enlisting, Ed went into Basic Training (often called “boot camp”). It wasn’t as physically challenging, due in part to being athletic in high school, as it was mentally. But it was immediately beneficial — being put together with a group of diverse individuals, all working together to accomplish the task at hand, was an inspiring challenge. And, coming from a small town in Kentucky, boot camp also offered Ed a snapshot into the lives of others — where they came from, and what their values were.

“Everything is based on teamwork. [As a group,] you can only move as fast as your slowest person. So you strive to be able to help someone else out.”

Following Basic Training, Ed had to complete Marine Combat Training — which teaches every enlisted Marine the basic concept of being a war fighter and different combat techniques. Then Ed was assigned to his first fleet and enrolled in Basic Food Service class. With each additional class, Ed realized he was learning skills that could transition easily to the civilian world. But it wasn’t only food service training Ed was receiving. It was an education on things he never expected.

“I grew up in Kentucky… I had been to Indiana and Ohio a couple of times. Now I’ve probably been to over three-quarters of the U.S. When deployed on a ship in the Mediterranean, we hit France, Italy, Greece, Turkey, Spain, Africa, and I have been stationed in mainland Japan and on Okinawa… that’s an interesting life.”

Cooking Up Quite the Career

What in Ed’s mind was going to be a four-year stint is now going on 22 years, bringing him to a senior leadership role as operations chief in personal and culinary services. Throughout his career, he’s been a cook in the galley at sea for six months, cooking for more than 2,000 service members. He’s been in charge of funding and budgets and responsible for a $12 million annual food budget. He’s worked in acquisition, procuring service equipment at Marine Corps Systems Command (MCSC). He even served as a recruiter. For Ed, the opportunities grew with each passing year. And with each new opportunity, Ed learned more about the Marines, about himself and about what it means to serve.