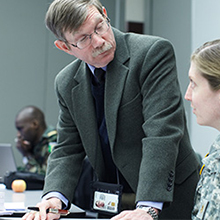 “I served for 22-plus years in the U.S. Army … Now I’m teaching at the U.S. Army Command and General Staff College. I’m a faculty member here, and I draw on my military experience on a daily basis.”

Gary grew up in upstate New York, a little outside of Rochester. He attended college and focused his energies on one of his passions — history. In fact, he majored in the subject, with the plan to attend graduate school and become a college professor. During this time he became interested in the Army.

"You can do a lot of things and still wear the same branch insignia."

“I joined the Army ROTC program as an undergraduate, specifically because [this program] offered certain kinds of extracurricular activities that I was interested in — and I could get those through the Army ROTC for free.”

Most students in ROTC programs serve on Active Duty shortly after graduation, but Gary was granted a two-year delay to attend graduate school to continue his studies in history. Only after receiving his master’s degree did he begin his military career as an infantry officer.

“As a senior officer or a staff officer, you’re providing resources and providing background support — leading men in small units and motivating them.”

Gary appreciated the skills he honed while performing that role, but he soon moved on to serve in a different capacity as part of a psychological operations battalion.

“There are units whose mission is providing the messages and information … convincing people on the other side … to see our side of the story.”

After serving in a variety of infantry officer assignments as a staff officer and company commander, Gary trained to become a foreign area officer, specializing in Arabic and the Middle East. A six-month course at Fort Bragg, North Carolina, led to a year of Arabic language studies at the Defense Language Institute in Monterey, California. Following that, he was assigned to the U.S. Embassy in Jordan to hone his language skills. This exposure to the State Department was the start of his transition into becoming a foreign service officer.

He first attended a general training program in Washington, D.C., for newly accepted foreign service officers, followed by a shorter course that focused specifically on the skills he would need for his first assignment. The entire program lasted about three months.

A Life of Foreign Service

Gary was then stationed at U.S. embassies in both Syria and Saudi Arabia. His primary job was to analyze political and economic factors in the local environment and help guide strategy based on this information. Foreign service officers play an important diplomatic role, explaining the U.S.’s position on a topic and reporting the host country's position in return.

Working at embassies, Gary also assisted American citizens traveling or living abroad with a variety of issues. Foreign service officers advocate on behalf of Americans who are imprisoned abroad, making sure they receive the same rights and treatment as a native of the country in which they have been incarcerated. And in case of an American citizen who dies while overseas, a foreign service officer will help identify the remains, secure the deceased’s property and contact family members. Diplomatic work also takes place in more social settings, as Gary notes.

“There are usually what are known as ‘representational events’ to attend in the evening: receptions, cocktail parties, dinners — at which the officers of all grades are working, not partying.”

Today, Gary is a retired major and assistant professor of International Relations at the Army Command and General Staff College. Coming full circle, Gary has realized his dream of teaching — though he never expected it to come out of his 22 years of service. Mentoring and instructing majors and other senior-ranking officials allows Gary to use both his experiences in the Military and his passion for teaching.

“I went about it [in] a very long and involved way. But everything I’ve done has some benefit now — in turning around and being a mentor, a coach, an instructor for these majors who are now going out to be senior officers in all sorts of places.”

Gary’s days are full of instructing, explaining and illustrating what he knows — and what he has learned — with the end result of enlightening others in the Military on what it means to serve. He feels it is his duty to give the next generation what was given to him: knowledge, pride and opportunity.

“If my career does nothing else, it illustrates that you can do a lot of things and still wear the same branch insignia. The opportunities are certainly there.”