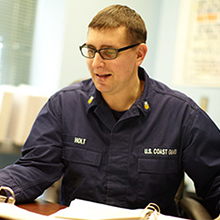 “It was Thanksgiving, and out of the fog came this very big wooden ship with big sails. It reminded me of the Niña or Santa Maria.”

Despite the fog at the time, the details of that Thanksgiving Day in 2004 remain crystal-clear in Glenn Holt's mind. The ship belonged to a church organization. There were disabled people on board. And it was sinking fast.

"It’s just the honor of serving that keeps me going every day I put the uniform on."

“I was a cutter rescue swimmer ... there were a couple of passengers on the boat that were jumping in the water ... it was pretty rough seas. I jumped in. I rescued a couple of them, and some of my other shipmates did the same.”

Before joining the Coast Guard, now Operations Specialist First Class Glenn Holt was an emergency medical technician. He loved the job. But he was looking for more than a paycheck. Then he met a fellow Coastie in emergency medical technician school, and they started talking. It sounded like the Coast Guard would not only make great use of his first responder training; it also offered a career that would fulfill his pride in his country.

“Before I actually became a petty officer, I was a Seaman on board a Coast Guard cutter for two years ... out of Cape May, New Jersey. And that’s kind of where you make your bones.”

Going to sea actually brought Glenn closer to people back on shore. He points out that the Coast Guard really exists to serve local communities, dealing with environmental protection, immigrant interdiction and drug smuggling. Glenn’s duties at sea directly impacted those back home on solid ground.

Today, as an operations specialist, he plays a leadership role in a wide range of activities and, as a result, is fully knowledgeable about critical technologies, including sea and land-based radar navigation and all communications channels. The modern role of an operations specialist is an accumulation of several traditional jobs such as radio and radar man and quartermaster. As such, Glenn has become something of a jack-of-all-trades — and master of many. In fact, he's likely to be found in the communications room, gathering information and supervising rescue and homeland security missions.

Glenn’s dedication was recognized in 2008 when the U.S. Coast Guard Chief Petty Officer Association named him the Enlisted Person of the Year for his superior performance. Two years later, there is still a note of sheepish disbelief in his voice as he describes walking up to receive the prestigious award in front of his command. While obviously proud of the achievement, he is quick to put it in perspective.

“It makes me sleep better at night knowing that I volunteered, I stepped up. I sacrificed my freedoms in defense of everybody else’s. And it’s just the honor of serving that keeps me going every day I put the uniform on.”