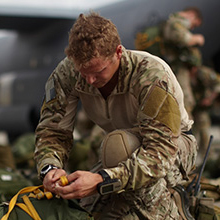 "It's always changing, and there's always something else to do. So I plan on staying with the Air Force for a while."

"Up in the aircraft for the first time ... you realize, 'I'm really going to jump out.' It's kind of nerve-wracking at that point. The adrenaline's pumping, and you almost don't want to do it, but you know it's going to be cool. It's just a rush of emotions."

Combat controllers go through so much training because they help to clear and secure air fields in hazardous conditions or behind enemy lines. Once they establish an air field, they also act as air traffic controllers, and they guide the planes to a safe landing. Combat controllers are often attached to Army Special Forces teams, Navy SEAL teams or Marine Special Operations Command teams, and they provide additional air power for these teams during battle.

After his training, Jacob was stationed in Okinawa, Japan, for two years. He has participated in exercises in Australia, Korea, Indonesia and the Philippines, and he has been deployed to Afghanistan and Iraq. Throughout this time, he has maintained his training regimen so he can be ready for anything.

"We go through a very rigorous training process, which basically prepares us for any type of situation that we could encounter ... It makes us better operators working in every type of environment."

Although Jacob has reached his goal of being a combat controller, he isn't stopping there. He wants to advance in his career, and he is earning his airway science degree so he can be even better at his job.

"It's always changing, and there's always something else to do. So I plan on staying with the Air Force for a while."