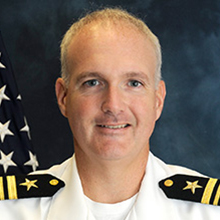 “When I was in high school, I wasn’t sure I was going to be able to pay for college. I thought a military scholarship would help get me through that, so I applied for a four-year ROTC scholarship.”

"If a Sailor [has] needs or problems, I really [try] to help them fix it … Every single person that came through the gates was important to us."

His grandfather had served in the Army in World War II, but James became interested in joining the Navy when he learned about the travel and scholarship opportunities — and when he saw the movie Top Gun.

James attended Norwich University, a senior military college, and earned a three-year ROTC scholarship from the Navy. As part of the program, James participated in everyday academic classes and military training with both the university’s Corps of Cadets and the Navy ROTC unit. During this time, he also homed in on his military career choice.

James was initially interested in submarines but eventually chose to go into the Surface Force, which includes cruisers, destroyers, frigates and amphibious combatants. Upon completing college and becoming a commissioned officer, he headed to San Diego for initial surface warfare training. There, James learned the basic fundamentals of ship life, steam propulsion and how to operate different pieces of equipment onboard. When he completed training, the Navy flew James to Perth, Australia, to meet the USS Fort Fisher — the site of his first assignment.

“When I got to the ship, I was assigned to the engineering department … I was the machinery division officer, responsible for all the equipment in the main propulsion plant that drove the ship.”

After about six weeks at sea, the USS Fort Fisher returned to homeport in San Diego for three years doing the same type of work. During his next tour in Japan, however, he became a damage control assistant aboard the USS Independence, a Forrestal-class aircraft carrier.

“I was responsible for damage control on the ship. We would drill and train the crew to be able to respond to a variety of different things — we were pretty similar to a fire department.”

From Japan, James was stationed in Illinois at the Great Lakes Service School Command. During his six-year stay there, he was able to step away from day-to-day ship life and focus on training the Navy recruits and future Sailors. James served as a school director and then as a business management director. In both roles, he enjoyed improving the young Sailors’ quality of life as well as helping them through the personal, family and physical challenges of their military journey.

“If a Sailor had needs or problems, I really tried to help them fix it … Every single person that came through the gates was important to us. We wanted to make sure that every person succeeded.”

Serving Across the Branches

When James relocated to Hawaii, he took advantage of a new program that allowed him to work with the Coast Guard. Although he was still part of the Navy, James served as a liaison with the Coast Guard doing maritime homeland defense and security. He conducted a variety of activities to improve operations between the Coast Guard and the Navy on the islands and beyond.

Today, you will find James still serving with the Navy in Hawaii as a surface operations officer. He takes part in anti-submarine warfare and is tasked with monitoring the waters of the Pacific. James also spends a great deal of time communicating with other groups to improve the quality and level of their performance. He works with surface ships and submarines on a variety of training exercises.

James is nearing his 20-year career mark, at which time he will be eligible to receive the Military’s generous retirement benefits. He has no concrete plans for when that time comes but is cognizant of the fact that, with the extensive career background he has gained in the Navy, he would have several options.

“I could walk into a variety of different civilian businesses at a management level … there’s so many opportunities.”

In the meantime, James is simply glad to serve and thankful for the many experiences the Military has afforded him. From helping to pay for his college education, to giving him an opportunity to see the world, the Navy has provided James with a wealth of personal and professional growth.