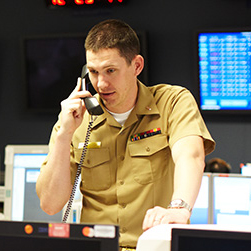 “I wanted to be a highway patrol officer in California. In order to get the experience, I needed to get into law enforcement, I decided to join the Military.”

"The single most important thing I’ve learned is initiative."

Jay Taylor took the ASVAB (Armed Services Vocational Aptitude Battery) test in high school and performed pretty well, but he wasn’t ready for military life at the time — at least not yet. He decided to go to a community college directly after high school, which was soon followed by two years as a missionary. At that point, inspired by an interest in law enforcement, he was ready to join and chose the Marine Corps.

“My brother had done four years in the Marines. I talked to him ahead of time and knew what his experience was like. I pretty much knew what I was getting into.”

After Recruit Training, Jay was sent to Lackland Air Force Base in Texas, where he attended school to learn about the military police career field. He was then assigned to Camp Pendleton in San Diego County as a corrections officer. Soon, however, Jay was looking for a new challenge, and he started training as a network specialist, where he learned how to troubleshoot computer problems throughout the base network of more than 40,000 users. It was quite different from his previous role.

“I knew that if I wanted to stay in the Marine Corps, I wanted to be an officer. So, I switched over and decided to do the MECEP (Marine Enlisted Commissioning Education Program) so I could go to college and get my degree.”

Jay chose to attend Oregon State University as a computer science major and enrolled in the ROTC program there. Unfortunately, during this time, Jay started having issues from a leg injury generally associated with running, cycling or weightlifting. He still managed to finish the Marine Corps Officer Candidate School and did so with honors.

“It was the hardest thing I’ve ever done — getting through that in the condition I was in. I managed to make it through and graduate, and I was very proud of that.”

After graduation, however, Jay’s knee continued to bother him. Despite extensive physical therapy and surgery, it became clear that his injury interfered with his ability to perform the job with the Marine Corps. That didn’t stop Jay. With help from his commanding officers, he began the process of transferring to a new Service branch — the Navy. He retrained to become an information professional officer — similar to the work he did for the Marines as a network specialist — and currently works as a satellite operations officer in Point Mugu, Calif.

“I work at NAVSOC (Naval Satellite Operations Center). We fly the majority of the Department of Defense’s narrowband satellites. I am in charge of the operations floor, where we track and control all of our satellites.”

Being an officer, Jay attends a lot of meetings. The morning starts off with an operations meeting, during which the team reviews the past weekend or 24 hours and what is planned for the current day. Jay is in charge of scheduling the personnel on the floor. He goes through who's assigned to what, making sure that people are where they need to be. At the end of the day, he reviews his team’s timecards. Jay is also responsible for performance evaluations and reviewing and signing off on all of the operations checklists used at the Naval Satellite Operations Center.

Jay's military career has provided him with work and life experiences that many only dream of. Having successfully progressed through career milestones in the Navy and Marine Corps, which included outstanding technical training and service in important leadership jobs, Jay understands what it takes to move ahead.