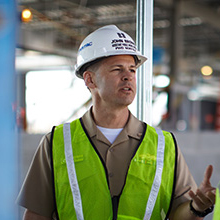 I was born and raised in Newport News, Va. Coming out of high school, I had no idea what I wanted to do in life. I just knew that I wanted to get away from home and explore. I took the Armed Services Vocational Aptitude Battery test and scored pretty well. So, the Air Force contacted me, offered me a job and I took it — it was the start of my life essentially.

"Everything has been working great for me."

Once I had finished boot camp and other training, I was stationed at Travis Air Force Base in California. I was an aircraft mechanic, so basically, I helped maintain heavy-cargo aircraft. They’d come back in from flying, and we would do whatever kind of maintenance and repair was needed to get the aircraft ready for its next flight. I deployed to Germany in support of the first Gulf War doing the same type of work and also spent some time in Japan. I loved my job, but after four years and at 22 years old, I decided to get out of the Service and try something different.

For about 10 years I tried a lot of different jobs: bartending, working on civilian aircraft, opening up my own business for a while. But none of that gave me the sense of accomplishment I found in the Military. So, I got more serious about what I really wanted to do. I finally realized that civil engineering was my calling and decided to major in it.

I was finishing up the last semester of school when the Navy contacted me. A recruiter told me about the civil engineering opportunities in the Navy. I did some additional research and found that it fit exactly what I was looking for. So, at 32 years old, I re-entered the Military and joined the Navy as an officer.

Interesting enough, my first assignment in the Navy was back at Travis Air Force Base. This time, however, instead of working on aircraft, I was the assistant resident officer in charge of construction. Civil engineering basically involves designing, building and maintaining your roadways, your airports, utility systems, buildings and bridges — anything the public comes in contact with. So, for two years I dealt with managing construction projects on base. During that time, I was responsible for about $40 million worth of construction, so I got a lot of good experience in management as well as contracting. (On the civilian side, you’ll be lucky to see that in your first 10 years!)

My next job was with the Navy Seabees in Gulfport, Miss. If you’ve never heard of the Seabees, they are construction battalions (CBs) for a large part of the Naval Construction Force. In the Seabees, we don’t serve on ships. We don’t fly airplanes. We don’t serve on subs. We’re “dirt sailors” because, although we’re in the Navy, we work on land. The Seabee area of responsibility ranges from humanitarian and disaster recovery efforts to wartime contingencies.

In the middle of my assignment in Mississippi, I was deployed to Iraq for seven months as part of a Seabee engineer reconnaissance team. While there, our job was to assess bombed-out bridges, roadways, buildings and camps and provide information to decision makers, to say, “OK, can we rebuild this? Can we repair it? Or do we need to tear it down?” One of the most interesting things we did, however, was in support of the first democratic elections in Iraq in January of 2005. We built some of the voting booths and provided security so people in the town could have a safe place to vote. We felt like we made a major impact.

Once back in the states, I became the East Coast assertions officer. Basically, I traveled from Maine to Puerto Rico talking to college students and professionals about the Civil Engineering Corps. I did that for 18 months. And now, I’m at Naval Station Norfolk in Norfolk, Va., where I’m an assistant public works officer.

Prepared for Whatever’s Next

In my current position, the level of responsibility has definitely increased. I’m now focused on the 10,000-foot view of the base. I need to have my hands wrapped around what’s going on everywhere in regard to planning and construction, so I can report back directly to the public works officer and commanding officer of the base.

I am leaving for my next assignment this summer. I’m going to the University of Florida for graduate school. The Navy is giving me a year. So, I’ll be completing the civil engineering program down there.

I’m about seven years out from retirement, since my Air Force time counts as well. One of the great benefits of the Military is I can serve for 20 years and be eligible for retirement for the rest of my life. And what we do in the Civil Engineering Corps is the same thing that city planners and city public works departments do across the country. So, when the time comes for me to eventually step out of my uniform, I should have no problem getting a job on the civilian side.

Everything has been working great for me in the Navy. I’m here to tell you that the government takes care of the Military very, very well. So, here I still am today.