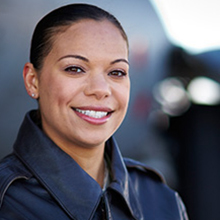 Captain Philipa Duncker's father, an Air Force loadmaster, hoped his daughter would follow him into the Military. One day, he asked her if she would like to go for a drive.

"I wanted to be at the bedside. I wanted to have more patient care experiences."

"We ended up in a base in Atlantic City, New Jersey, and I was pretty much being told everything there was about joining the Air Force. Next thing you know, I was swearing in."

Philipa joined the Air National Guard and trained as a medic while attending Rutgers University. Originally, she planned to become a doctor, but her time at technical school made her realize she wanted to be a nurse instead.

"I went away to tech school, and I found that I did love medicine. I wanted to be at the bedside. I wanted to have more patient care experiences."

Training to Help Others

After graduating from Rutgers, Philipa discovered another opportunity. While drilling at McGuire Air Force Base as a member of the Air National Guard, Philipa heard about flight nurse positions within the base's Air Force Reserve unit.

"They had two air medical squadrons. I looked into it and decided maybe this was the thing for me. I went to an interview, and they welcomed me with open arms and said, 'Whenever you're ready, come on over.' "

When Philipa moved from the Air National Guard to the Air Force Reserve, she also started her Commissioned Officer Training (COT) and became a second lieutenant. During this time, she attended flight school, where she trained for the primary duties of a flight nurse. This position involves caring for patients while they are being moved from one location to another in an aircraft.

"When it's time to move that patient and/or patients, there's a team that's waiting on a plane. The job of that team is to monitor the patient and to be ready for any emergency that's going to happen for that patient throughout the transport."

Philipa has been deployed to Joint Base Balad in Iraq as a flight nurse and also as an officer-in-charge of infection control. In this position, she established and monitored the procedures that help keep nursing areas clean.

"Infection control is the same on the military side as it is on the civilian side. It's just that when you're dealing with it on the aircraft, now you're in a big metal thing that's dirty and dusty, and you don't have water storage. So you have to be more vigilant about how you take care of patients and how you take care of yourself on the aircraft."

As a civilian, Philipa is also a nurse, and she has taken on multiple positions in her career. Right now, she is an emergency-room nurse. This schedule keeps her extremely busy, but she treasures the experiences and the friendships she has had through the Military.

Philipa's future involves staying with her Air Force Reserve family - something she never would have imagined when her father first took her on a drive years ago. She's glad he steered her in the right direction.