The Military offers unique educational opportunities for students who plan to pursue a college degree. These options — service academies, senior military colleges and maritime academies — offer world-class education and a deeper understanding of military culture. In addition, these schools grant full tuition in exchange for a period of service commitment.

Hard Work at the Naval Academy Pays Off

Length 4:57 Hard Work at the Naval Academy Pays Off

Lieutenant Junior Grade Alex Burtness explains how his interest in math, science and robotics led him to pursue entry in the Naval Academy.

Lt. Alex Burtness: I've pretty much been taking things apart as long as I can remember. I was always interested in science and technology, and I found pursuits that linked up well with that. I think, looking back, the path to where I am today is very clear. Finding the challenges that fit with who I am and what I valued and what I was skilled at — I think it all makes sense. I'm exactly where I need to be.

In high school, I always sort of picked my schedule more around all the advanced science courses — I did programming, I did some robotics things that my high school offered. With robotics, math is a way to describe the way that everything moves and interacts, and, for me, that was fascinating. It sort of sparked that interest that, you know, led me down this very long path to bring me to where I am today.

Jessica Burtness: Alex doesn't choose the easy way. He doesn't shy away from challenges. His parents are both really hardworking people. They have a very strong work ethic. I think that definitely shows in Alex.

Alex: I think getting that rejection really, just really focused me and really showed me that maybe what I was doing up until that point and the effort that I'd been putting in wasn't sufficient. So I spent a year at Oregon State. I worked very, very hard there. I focused every day on doing the best that I could so that I could put in a stronger application at the Naval Academy, and they recognized that and I got in the second time around.

The excitement of graduation — definitely a moment that I'm going to carry with me for the rest of my life. There was literally just a buzz in the air and people were just agitated in their seats, just waiting to throw their hats in the air and to be commissioned as second lieutenants in the Marine Corps and ensigns in the Navy. It was incredibly exciting and incredibly rewarding to know that that four years of very hard work had paid off.

What to Expect in the Air Force Academy

Length 1:59 What to Expect in the Air Force Academy

Instructors and cadets share their experiences from attending the Air Force Academy. In exchange for full four-year scholarships, cadets participate in a rigorous program of study, which prepares them to become second lieutenants in the Air Force.

Dr. Steven Samuels: I think students who are considering attending the Air Force Academy, I think need to think carefully about it. This is a place that has a lot to offer, but it's also not for everybody. There are a lot of challenges here that a lot of people honestly aren't up for.

Cadet Alicia Wallace: Being here, I've done more than I ever thought I could ever do with my entire life. I mean you don't realize what your limits are until you've pushed all of them and realized that you have incredible potential.

Dr. Steven Samuels: People who choose to come, the men and women I teach, for example, I mean they're on every day.

Capt. Jessica Kashka: Here at the Academy, we're training leaders, but we're also training folks to be in our Military. They're getting day-to-day live experience, on-the-job experience, some of them are jumping out of planes, flying planes, running satellites. It's a grand experience.

Dr. Steven Samuels: The benefits of a military and an academic institution or, well, I guess they're exactly what you would think. You have an academic institution, so my students are doing the same things here that they were doing at Stanford. You know they're taking the same kinds of classes. They're just as rigorous. I mean, I can testify to that, having been there. When I graduated from college, you know, I wasn't sure what I was going to do, and I did some of this and some of that. They know what they're doing when they're graduating. And knowing what you're doing the day after you graduate really focuses you as an undergraduate. The Military and the academics are separate, but they're also the same thing. They're two different ways of getting to the same point.

Cadet Alicia Wallace: I know someday I'm going to have an impact on lots of people, and I love that. I'm a totally different person. I'm still me, but I'm a better me.

If connecting an industry-leading STEM or business education with a purpose larger than yourself is on your radar, check out what the U.S. Coast Guard Academy has to offer.

We're in the top 1% for community service engagement and the number one top regional public institution.

And 100% focused on our mission: Graduating officers to lead the United States Coast Guard. 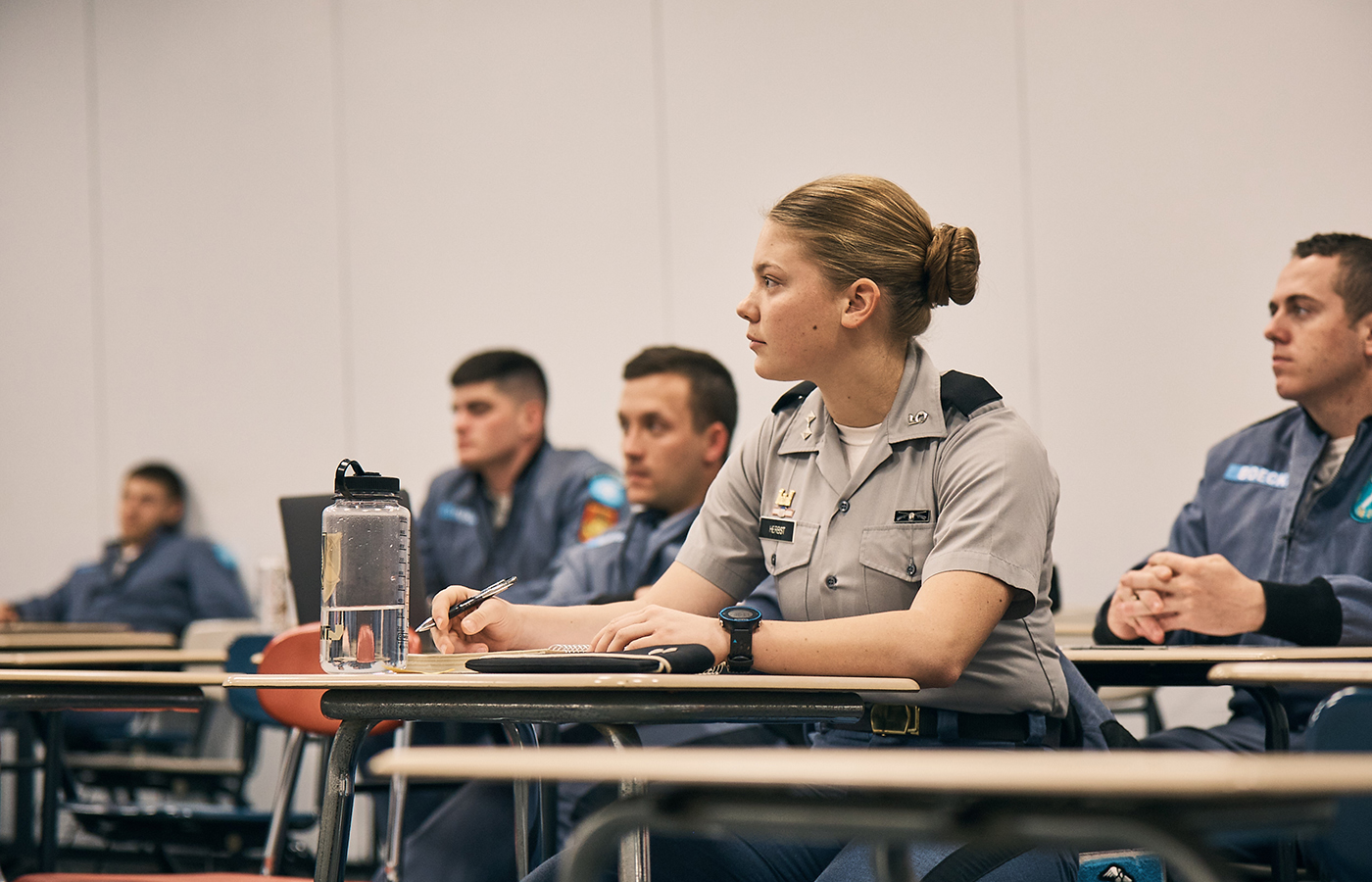 For students who want to experience a military environment while getting a first-class education, the five service academies offer a fully-funded tuition that includes books, board and medical and dental care.

The competition to get in is fierce. Admissions criteria include:

Graduates of all academies receive a Bachelor of Science degree and are commissioned as officers in their respective Service branches. After graduation, they are obligated to serve a minimum of five years.

Service Academies by the Numbers

Similar to service academies, senior military colleges (SMCs) offer a combination of higher education and military instruction. They are among the most prestigious and famous education institutions in the world, and they offer financial aid packages for eligible students. Every SMC cadet must participate in the Reserve Officers' Training Corps (ROTC) program, but only those cadets who receive an ROTC scholarship are required to enter military service following graduation.

Senior Military Colleges by the Numbers

Maritime academies produce shipboard officers for vessels integral to shipping and transportation needs, but a service commitment is not always required.

Maritime Academies by the Numbers