From Curiosity to Career

Length 1:27 From Curiosity to Career

Discover how pursuing an interest in technology in today’s Military can lead to an exciting and rewarding career.

Seaman Apprentice Kyle Johnson, U.S. Navy: I do have a background in gaming, which led me to my background in robotics, and I fell in love with coding. You know, it sort of opened up the avenues to this career field.

Seaman Apprentice Jennifer Budzisz, U.S. Navy: My family would always have problems with our Wi-Fi, printer, anything and, for some reason, I was the go-to person for help.

Ryan: Anybody who's interested into mathematics, in computers, in logic would find themselves right at home here.

Seaman Apprentice Bryce Games, U.S. Navy: When I was in carpentry, after, after I put up a wall, I’d step back and be like, Man, I built that. Same thing with a network. To know that you just set up a network, and it’s running well, and that you’re getting data from here to there like you’re supposed to do, you just did your job, and it feels good knowing that you do it well.

Master Chief Petty Officer Aaron Manning, U.S. Navy: The students are constantly trying to push the boundaries of what is known and what’s not. They’re building their own networks to see how impenetrable they can make them and then go to the other side and try and break into them themselves.

Jennifer: The most exciting part of this for me is basically just being able to see myself in the future doing this job.

Ryan: I absolutely made the right decision because I’m going to be going on to do even more things that I’m interested in. I don’t see how it can get much better than that.

What To Expect: Cyber

Careers in this field focus on strengthening cyber defenses for Military systems. Specialists in this area typically have strong math and critical thinking skills, as well as proficiency with computers and computer networks. They serve to defend Military networks, protect U.S. interests against cyber attacks, and perform offensive cyber tactics In support of combat missions. There are a range of Cyber positions among all Service Branches, including the Reserve and Guard.

Captain Matt Babcock: We are in a digital arms race. More than any other realm, cyber impacts our instruments of power: diplomacy, information, military, and economic. And that just continues to grow on a daily—sometimes hourly—basis.

Information Systems Technician First Class Ward: It’s always different. I think that’s the best part of it. The challenges will always be unique to whatever you’re fixing that day.

Captain John Blalack: You know, something we’re focused on this week will be ancient history next week. And then there are things that are more long term and lasting.

Sergeant First Class Mariam Shakour: The way we look at information technology, we have to go everywhere. Let’s say we have our war fighters on the front lines. Then guess what? They’re going to need to communicate with individuals that are not on the front lines. So, there have been situations where we will have to go to them. They need that. It’s life or death.

Captain Matt Babcock: You’ve got to be able to creatively problem solve, which is what is fun about it. You get a lot of pride out of solving the tough problems that are out there.

The dynamic world of cyber requires collaboration between skilled individuals of many different backgrounds. When it comes to cyber, there really is strength in numbers.

Captain Andrew Williams: Cyber involves everything. There are so many different domains. It’s impossible to be a specialist in any one thing. Especially as an officer, you’re expected to be a generalist.

Captain John Blalack: There’s a lot of individual skill sets, a lot expertise across the floor. I’ve got to have intel to tell me about the threat and how prevalent it is. Then I’ve got to have the technical guy that can tell me how it is exploited on the network. So I rely on the relationships and the people that have those skills.

Sergeant 1st Class Mariam Shakour: To be a good leader in the cyber world, I think you really need to know who you work with. Those personalities make a difference, because they want to look to you to know that if they can’t do something, can you get them in the right direction to be able to do what they need to do for their job?

Captain Andrew Williams: Throughout my very short career so far, I’ve had the ability to work, not only with the Air Force, but other branches as well.

Commander Erica Dobbs: When you really pull back the layers on cyber, cyber is cyber. Everybody learns and train in the same environment.

Senior Master Sergeant Frances Perkins: It’s a lot of coordination, a lot of action, a lot of trying to get to the bottom of what is happening, where is it coming from, what’s going on as quickly as possible, allowing communications to never stop.

Captain Andrew Williams: We are employing some of the very first and only of its type cyber defense on the planet. To say, “This technique doesn’t exist. We’re going to make it,” I think is exciting. 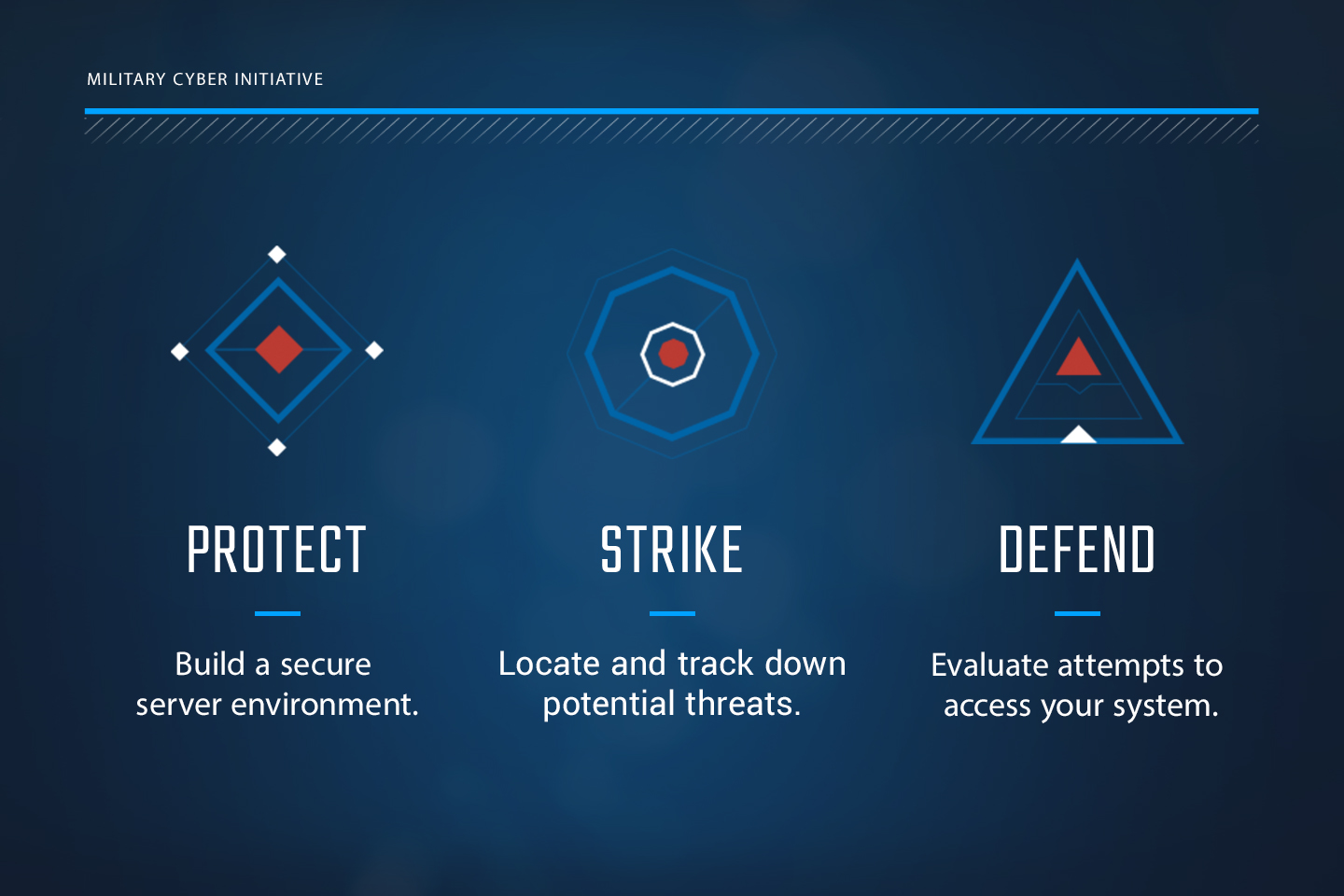 Think you can hack it as a cyber warrior?

Play this online game and get a sense of what it's like to be part of a successful cyber protection team. You can also explore how each part of the game corresponds to a career in cyber.